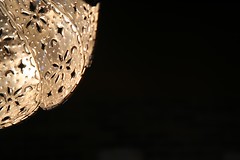 I'm disproportionally pleased with this shot.  I think it's the first picture I took that I had a pretty good idea what I want it to look like, figured out why it won't work the way I want, and how to fix it.  As a result, it was taken on full manual, (as the autofocus failed), with manual aperture and exposure (so I could get the details on the lamp properly).

I took ~12 pictures of it, trying different things, but this is the one I decided came closest to what I was aiming for.

My images don't precisely scream autumn, perhaps because winter hit just this week (Wednesday and Thursday: sudden sub-zero temperatures and a hailstorm). I like them, though. I was pretty convinced that I wouldn't find anything worth shooting on a cold day in the middle of the city, yet found these trees and leaves just a few metres from my workplace, on a road I don't normally go down. I like colours of the first, the line of the second and the shadows and sunlight in the third, and how they all have a feeling of the end of autumn to them. I'd much like to have some more variety in them, though, instead of just leaves, leaves, leaves, and if I'd put in more time and effort I would, and (also if I'd taken the time to) I'd have liked to take brighter, more emphatically autumnal photos. 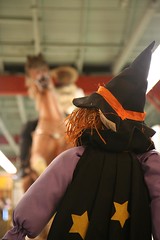 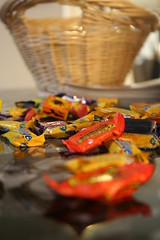 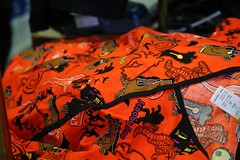 I'm not actually a big Halloween fan, might be related to not having grown up with it.  But some of the costumes are always cool, so I try to tolerate it :)

As far as actual picture taking, nothing really interesting.  The witch was found while walking around in Fry's - they had their Halloween decorations up, but also left their usual wild west stuff up.  The combination of the two seemed interesting - and I was careful to make sure the background is out of focus there, mostly so you couldn't see what a crappy plastic horse that it :)

The candy shot I wanted to get the narrow focus, so shot with enough zoom so that the depth of field would be fairly narrow. Is that the correct terminology?  Is that even the right way to go about getting that?

All shot with the same body/lens, full details can be seen on the flickr pages (which are linked).

Any thoughts/comments would, of course, be appreciated!

(Posting two of the three assigned. I've got the third photo planned, just not taken yet. Me, procrastinate? Never!)

Clicking on each will open up the medium sized version.

Personally I love the fall, and so I chose to do the general fall scenes instead of Halloween specifically. The first shot is a lovely sunset that I caught before leaving work one day. For whatever reason I usually notice sunsets more often in the fall - probably as I'll start to get the itch to leave work about then, instead of looking up after I've already gotten home and realizing it's dark out in the summer. That and the colors are just beautiful.

The second shot is probably pretty self-explanatory too. A long winding road with the promise of a journey ahead, the leaves changed and carpeting the ground. To me that's Fall. :)

Edit: Better late than never, I added the third photo. I really wanted to do something aside from an outdoors scene... and promptly got my rear handed to me by a rather annoying cold. So a scene out of my kitchen. This is the first time I've tried to do something like it so I'm not sure how much I like the result or not. At least it's something different, eh? This was a chance shot taken a couple of months ago in the town centre, of a seagull. I really like the diagonals of the image and the slight sense of vertigo, and the bird literally trying to escape the image. (The bird heading out of the image like that breaks at least one rule of composition, but I think it works in this case.) I dislike the lack of sharpness and that I have the walls and pavement in focus rather than the bird, and I'm also rather sorry that I took the picture in digital camera black-and-white and didn't at least get the extra information taking it as colour could have recorded.

Anyway, hello all. I'm Sabrina, and I'm keen on photography but lacking any real knowledge of it. I've been out of the habit of taking photos for some time (my camera broke, and I haven't trusted it in the same way since), but want to get back into it. This comm seems like a good chance to -- assignments to give me focus, the chance to give and receive feedback and improve my sense of what a good photo is, and a potential sense of community. My current camera is a Casio Exilim EX-Z120; I've promised myself an upgrade if I get into photography enthusiastically enough.

[I really apologise for the lateness of this; I forgot the due date and only realised it had passed when I went to look up the tag-format for this. I hope it can still be accepted?]

I cannot actually do the Intro assignment. I even had an image of my own in mind when I made up the assignment. I know exactly where it is -- on the hard drive of the laptop I need dell to fix 'cause it's not currently making a connection on the AC power. Meh.

As for my hopes for this community? I hope it gets me shooting more (and that I will be motivated into thinking I will use a DSLR enough to actually plop the money down for one) and to re-think about what digital photography can be as an art form. I also hope that over time this community will morph more into a community, where we will ALL suggest assignments, and will run more like a workshop than a class. But for now I'm happy where it is. 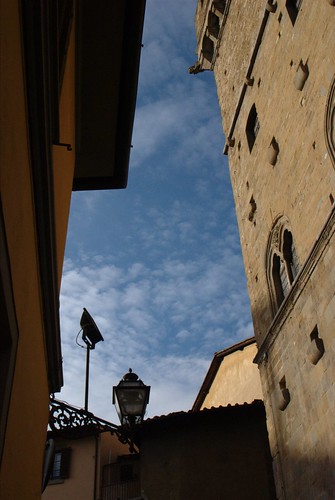 
This was the first shot I took when I went out exploring in Florence this past winter. I like this one in particular in part because of its palette, which has the nicely contrasting warm browns of the stone and the suitably cool blue sky (this was actually one of two days out of the 10 I was there that I got some blue skies. It was depressing). Anyway, I'm really into how long the photo seems because of the angle I was shooting at. I love the shapes the buildings create and how parts of them seem to connect. I also like the interplay of shadow & light and the protrusions of artificial light in the most shadowed part of the shot. Basically, it expresses how I felt at the time -- a little claustrophobic and overwhelmed, but knowing there's a break ahead.

What you can't see at this size is that the picture isn't nearly as crisp as it could and should be, and that is in part because I wasn't shooting smart (stupid auto). If I had spent more time thinking about it, I could have taken a few more shots and framed it a little better, got the best absolute lighting, etc.

I actually took several semesters of photo in college (4 or 5?) and the main reason I'm here is to be prompted to take my (fairly newly acquired) d40 out into the world. I do well with having assignments, and I rather enjoyed abstracting them out when I was taking classes (like a portraiture assignment where none of my photos showed the girl's face). I worked *a lot* in the darkroom. I played with scale and textures and did lots of crazy things. I knew my Canon AE-1 like it was a part of myself. I barely know my d40 at all. Basically, I want to get back to a place where I'm feeling technically competent taking photos, and I want to have a place to share my failures and successes :)

Taken with a borrowed D80. I was being a tourist and mostly shot on auto, and Flickr tells me it's at 1/1250s exposure at f/9, ISO1250, 28mm focal length (I think I was using a telephoto at the time. Not my camera, though, so I don't recall exactly).

(( Also, I tend to be a bit longwinded and often default to poetics when I can't think of a better way in which to explain myself. I'm told it's endearing, though! )) 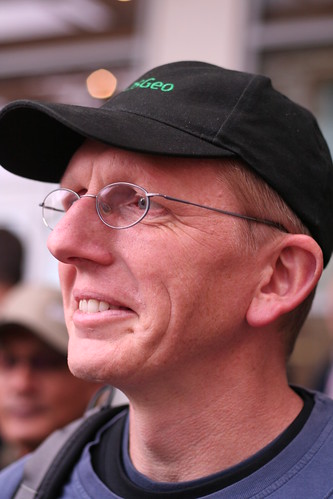 I really love the lighting. The light and shadows really bring out all the texture there. Jeroen looks really happy -- just smiling for the camera, I suppose :) It's a low exposure time, and the whole picture is just really 'crisp' feeling. I took a lot of portraits that week, but this one still stands out as my favorite.

gandalfgreyhame). However, I haven't taken any shots of anything other than portraits well before. I took a photo class in college, and I really felt like having specific goals helped me focus myself on improving different aspects of my photography. I'm currently working on taking one good picture a day to do this (I'm currently 15 photos in and counting), but I'm still shooting to my strengths there, so I'm looking forward to having the encouragement to find more variety.

Also, I love having formal feedback on my stuff: You can only hear "cool" so often before it starts to not have much effect on your photo taking. :) 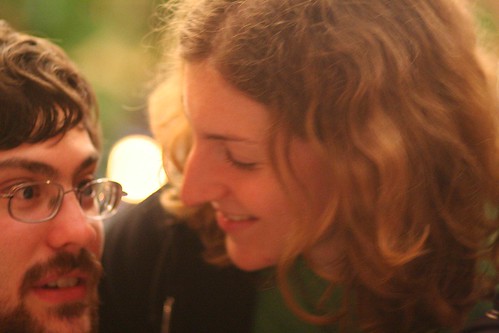 What I like?  It feels warm.  I've been told it captures their relationship quite well - she looks loving, he looks terrified ;)  I like the fact that the background is non-existent.

What I don't like?  It's a bit grainy, slightly out-of-focus.

What am I looking for here?  Any advice - I've *very* new to this whole "taking pictures" thing, and still trying to figure out which end of the camera to point away from me.  I need to learn what to look for, and also *how* to look in general.  What goes through your minds when you take pictures?

I present to you, fellow photowumpers, my darling Lucy!

There's a couple things that I like about this photo - to me it conveys her character pretty well, which is quiet and soft. It was only natural light here - you can see a version with flash here and I think it looks very harsh (though admittedly it looks better in print that it does on screen).

Even though it's just natural light there's still a lot of detail in it - I love how the texture of her fur came out and if you look at the full size scan (8874x5695, 5.3M) you can see me reflected in her eye.

Edit: A still-large but much more manageable size copy here.

I'm unconvinced about the framing - she's almost exactly centered, which is something I usually try to avoid. I say unconvinced though as she *is* resting and the photo is to show how pretty she is instead of trying to catch her "in action".

Technical details: 50mm lens & Tri-X 400 B&W film. For better or worse I didn't record the shutter speed or aperture, for all I know I could have had the camera on full auto at the moment. Taken sometime this summer. Oh, I'm also happy to scan film negatives for you guys if coming up to my place is easier/cheaper/more enjoyable than whatever other options you might have.

What I want to get out of the group: It'd be easy for me to sit around taking easy/safe photos of cats and such all day, so I'm hoping to be challenged a bit in terms of finding subjects/themes to shoot. And of course critiques on the photos themselves, particularly composition. And to have a good time in the process!
Collapse